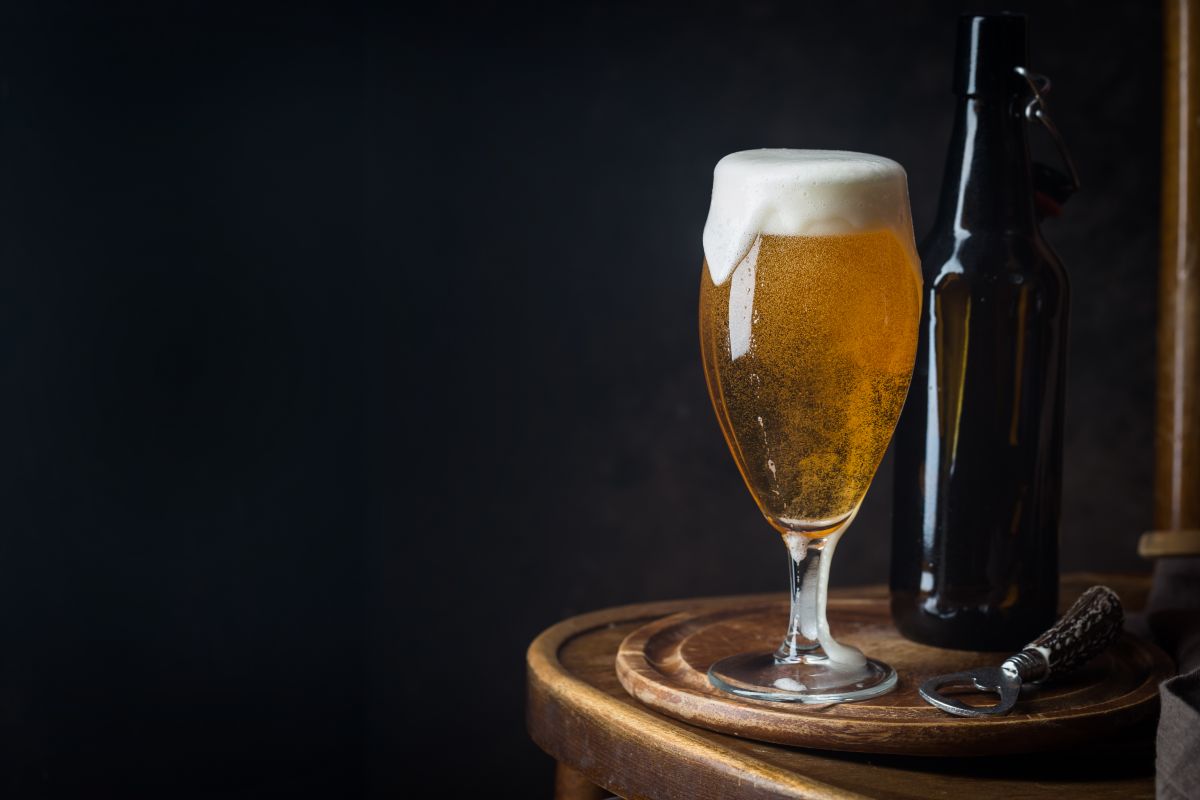 Are you wondering whether or not you should still drink beer after being diagnosed with a fatty liver? I’ve been in a similar situation and I have the answer in today’s article.

I will get in depth with this, but if you’re in a hurry and just want to know the (harsh) truth, here it is:

No, you are no longer allowed to drink beer – or any type of alcohol – after being diagnosed with NAFLD / fatty liver.

Even small amounts of alcohol can cause damage to your liver and put extra pressure on it, making it difficult, if not impossible, to reverse your condition.

Drinking beer with a fatty liver

“Just a small bottle of beer. Can I drink that? Am I allowed to drink at least a glass of beer every now and then if I have a fatty liver? It can’t do much damage now, can it?”

These are the questions that most people start asking after a while of dieting to reverse their fatty liver. You don’t have to be an alcoholic to start missing drinking a glass of cold beer during a hot summer’s day…

But, just as it is the case of wine, beer is on the list of things you are no longer allowed to consume if you have a fatty liver.

I would go as far as saying “never again” – even after you reverse it! (This is what I did in order to keep things on the safest side possible.)

And now it’s time to get a bit more in depth and see why you should stay away from drinking beer if you’ve been diagnosed with a fatty liver.

As I mentioned in the article detailing the bad effects alcohol has over our livers, there are a few main things we should worry about even when drinking beer or any other type of beverage with lower amounts of alcohol:

1. It puts extra pressure on the liver, damaging its cells and leading to scarring and potentially more dangerous issues.

2. The alcohol also damages the gut, allowing bacteria to find its way from it to the liver, putting even more pressure and damaging it even more.

And when we’re talking about a liver that’s already dealing with its fair share of problems – like the extra fat it accumulated over the years, things can get worse fast!

This is also the reason why healthy people could benefit – or at least not get harmed – by drinking alcohol (including beer) in moderation.

A healthy liver can usually handle the extra pressure it gets from moderate alcohol consumption, but with one that’s already sick, things get more difficult and the damage alcohol does is even higher.

Moderate amounts of alcohol might be good and help improve your health, but that only works for individuals that already are healthy!

Those who say that a glass of wine or a glass of beer or whatever keep you healthy usually won’t mention that they’re not talking about people with pre-existing conditions.

Hey, but beer is food!

Believe it or not, many people say this and I just hope they don’t really mean it.

However, just to make things clear: as long as there’s alcohol in it, you are not allowed to have it. And no, you can’t consider it food, even though it’s high in calories.

You are not allowed to “eat” a cupcake if it has been soaked in whiskey and you can’t eat your cereals with beer instead of milk (saw it as a joke in the hilarious Netflix series The Ranch).

Alcohol is not food. Beer is alcohol. You are not allowed to have it.

Could a glass of beer really do that much damage?

Of course, nobody can say how much actual damage drinking a single glass of beer per week – or per month or per day – does to your already suffering liver.

Due to the low alcohol contents of the beer, chances are that the damage won’t be that big.

But there are, again, two things to consider here and long term damage is a prospect if you’re suffering from a fatty liver and still drink alcohol:

1. “Just a glass a month” can turn into “just one glass a week,” then “just one more glass” and “one more now because it’s a special moment” and so on until it could eventually spiral out of control… too big of a risk!

Plus, chances are that, if you can live for 29 days without drinking any beer, you can easily add another day per month. Same goes for the weekly stuff: if you can avoid drinking for 6 days straight, you can do it for 7 too!

It’s not like you have a schedule and you must drink it no matter what. Stay away from beer, stay away from all types of alcohol!

2. We don’t really know how much damage even a glass of beer does to your liver.

It could be close to nothing, but it could be a lot. Depending on the stage of your fatty liver, its effects could be even greater… which brings us to the most important question of them all:

Are you willing to risk it?

This is a question that I heard during my initial research, after being diagnosed with a fatty liver. Somebody was asking the same question to a guy who wanted to drink “just” during the weekends, when going out with friends:

Are you willing to risk it all on a single glass of beer? It’s your life that is at stake here. Maybe the effects won’t be immediate. Maybe things won’t get worse as soon as you finish drinking your beer.

But what if, 10 years from now, the damage done by it kills you? Are you ready to risk your life for a glass of beer?

That was some really strong stuff and it really made me think about priorities and things that matter in life.

That’s one of the things that kept me motivated – because usually all the medical proof doesn’t have as much as an impact on us, unfortunately. But always thinking about that question above keeps me on track.

I haven’t had a single sip of alcohol since being diagnosed in 2014 and I am not planning to ever drink again. And my fatty liver was non-alcoholic, just to keep things clear – so not caused by alcohol consumption.

I wasn’t a big drinker before, but I did enjoy a glass of whiskey on the rocks every now and then, while during the summer there were periods of time when I’d drink at least one beer a day… but not anymore.

It wasn’t easy. But here I am, years later, after having managed to reverse my fatty liver, feeling great and healthy and still avoiding beer – or any type of alcohol.

It can be done, trust me and your life – be it social life or not – won’t feel much of a difference.

Can you drink non alcoholic beer with fatty liver?

This is a difficult question to answer. My doctor told me not to drink beer at all – not even alcohol free one. My doctor also told me that I won’t be able to reverse my fatty liver, which I did.

This is, in the end, your choice to make and you should use your own judgement to decide if you should do it or not.

I personally don’t think that the harm non alcoholic beer does is anywhere near the harm alcoholic beverages do.

In other words, yes, I do drink non alcoholic beer every now and then. BUT I started drinking only after I had managed to reverse my fatty liver, and still in moderation, usually just during the summer – one every few days at most.

The only problem, in my opinion, with non alcoholic beer is that it is high in calories and carbs. And these are bad for the liver as well – and your health, generally.

But since it has no alcohol in it, it doesn’t do the extra damage so even though it’s not something that anyone would recommend you to have, I believe it’s a guilty pleasure you can allow yourself every now and then, especially if you enjoyed drinking regular beer in the past.

I also heard that drinking beer moderately does good to your kidneys, so I am using that as an excuse as well.

Not sure if it’s really true – and I won’t lie saying that I drink non alcoholic beer for the sake of my kidneys, but my point is that as long as there’s 0% alcohol in it, it’s safer to have.

Just make sure that you are drinking non-alcoholic beer (with 0%)! Some beers are labeled as non-alcoholic or alcohol free, but they still show something like “up to 0.5% alcohol” while some are “low alcohol” beverages, going up to 2%. Make sure that the label reads 0.0% alcohol!

Even 0.5% is harmful for a fatty liver and you should stay away from it as well.

And take the calories and carbs into account if you decide to allow yourself a bottle or a glass of no alcohol beer every now and then: even without alcohol, it still has a lot of calories and carbohydrates!

I hope it’s clear now that you should stop drinking beer if you have a fatty liver. Alcohol in general is bad for the health of our livers and even in though in some cases having a bit might help, this is a completely different situation.

If you still have questions on this matter, don’t hesitate to let me know by commenting below.