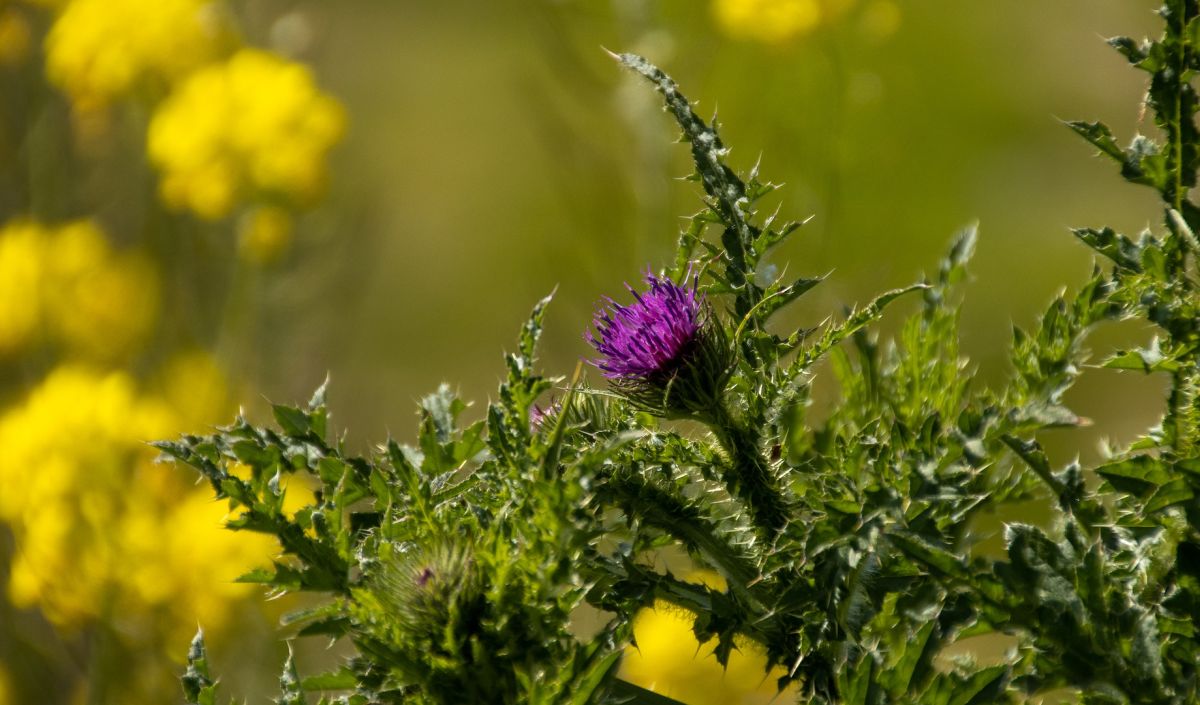 Of all the dietary supplements that are supposed to help you reverse your fatty liver disease, Milk Thistle is probably the one that you hear about most often. But is it really that good? Does Milk Thistle help reverse a fatty liver?

We’re going to talk about it in today’s article. Hopefully this will help you decide if you should take some Milk Thistle supplements or just ignore them and focus on a healthy diet instad (check out my article about the best fatty liver diet).

It is plant scientifically known as Silybum marianum (nothing silly about it, though!), of the Asteraceae family. Looking at its name you know now why Milk Thistle is also called silymarin (the actual extract from the plant itself, usually the seeds).

Milk Thistle has red to purple flowers and shiny pale green leaves with white veins and has been used for thousands of years to help improve the functions of the liver or cleanse it.

I know that there are people out there who have no faith in plant-based medicines, but in this case, you might want to change your mind.

Except for the fact that it has been used for over 2,000 years as a natural remedy for liver diseases, recent studies have shown that it might indeed have beneficial effects on the liver. (like this one among many)

The milk thistle extract is usually prescribed to treat mushroom poisoning, alcoholic cirrhosis, chronic hepatitis, drug and alcohol-induced liver damage, acute viral hepatitis as well as fatty liver and many doctors consider it the most important supplement when it comes to maintaining a healthy liver.

Many recent studies like the one I linked to above (the United States National Library of Medicine and the National Institutes of Health report over 400) have shown that Milk Thistle indeed has beneficial effects upon the liver, with its active ingredient Silibinin (silybin) having hepatoprotective (antihepatotoxic) properties that protect liver cells against toxins.

In plain English, Milk Thistle is apparently having a good effect over the liver, helping lowering ALT and AST numbers, as well as fat accumulated in the liver. Studies also show no side-effects, which is even better.

You can check out the Wikipedia article on Milk Thistle to find out more about it and why we do have all the reasons to call it a miracle plant.

What I am going to write below is my thoughts and opinions, based on my dealing and reversing my own fatty liver.

Usually, I am not that type of person that believes in natural remedies or herbal remedies, but whenever they are backed up by scientific research and years of experience, I tend to be a bit more receptive.

Also, one of the facts that made me at least give it a try is that taking Milk Thistle supplements rarely has any averse effects. So, at worst, you get nothing out of this… I considered it was worth doing.

Because if indeed the regenerative effects on the damaged liver cells are real and it does help your liver recover, as all those studies discovered, then you are up for a major win.

I wasn’t going to just say no to this opportunity and I think nobody should.

Even though I can’t say that I am 100% sure that Milk Thistle does help your liver – as there are also some studies claiming that it’s impossible to say that it does better than Placebo – I have decided to take these supplements, especially since my doctor also recommended them.

As long as there’s no possible harm to be done, I am ready to try anything. Especially since it’s something that so many others had such good success with.

What if Milk Thistle really improves my liver’s regenerative capabilities and does help reverse fatty liver faster? I’ve got nothing to lose if I try – and I can say I am happy I did take them!

What is the best Milk Thistle supplement to take?

Please note: I get commissions for purchases made through links in this article. However, this does not influence the price or the products I recommend.

When deciding what type of Milk Thistle supplement to take for your Fatty Liver, you should always talk to your doctor.

When it comes to me, my doctor has initially recommended a high dose (because according to her the active ingredient silybin is not easily absorbed by the human body) of gel pills (1,000 mg).

I took one pill per day for three months in a row, then took a break of one month. Then, three more months for me.. But after my 6-month check-up, the doctor already told me that there were nice improvements in my liver, which looked a lot better! It was already healing well!

While I can’t say that it’s 100% the effect of taking Milk Thistle – and I actually doubt it is – I am really happy with the results. Sure, I also exercised a lot and changed my diet drastically, but I am sure all things helped. I had the results to prove it and hopefully things will keep improving.

(UPDATE: Indeed, I managed to reverse my fatty liver and probably these supplements paid their part as well!)

You get a large box with 180 pills – enough for six months. That’s a really low price to pay for something that has the potential to fix your liver or at least help you in your quest to do so.

Alternately, if you want to go for a mixture of natural ingredients created by a team of experts to help the liver function properly, your best choice is Liver Support Plus – a great way to take in a ton of natural supplements for the liver, and not just Milk Thistle.

These pills have lots of natural goodies like Milk Thistle, Beet Root, Chicory, Zinc and many other, including the proprietary blend of ingredients (with Turmeric, Ginger and more). Here is how it looks like:

In other words, Liver Support Plus takes all the natural ingredients that are considered to help reverse fatty liver and help the liver function properly (although in many cases there’s no medical proof to back up these claims), and puts them in a single pill that you have to take each day as a supplement.

Since it’s all natural stuff, I consider these – just like the Milk Thistle – something that at worst will not do you any harm, but otherwise might do a lot of good. So it’s worth trying at least to see how fast your improvements appear.

How to take Milk Thistle supplements for fatty liver?

Normally, you are supposed to take one pill each day, usually in the morning. It doesn’t matter when (before or after eating). I personally took them after my breakfast.

The general recommended dose is of 1,000mg silymarin (the active ingredient), but you should always discuss with your doctor – there are options for 500mg and 250mg.

I managed to reverse my fatty liver after 18 months, or maybe sooner – but that is when I got confirmation.

I personally can’t say that I am 100% sure that it was Milk Thistle that helped me achieve that.

I also followed a strict diet and I don’t think that without changing your eating habits, you will be able to reverse this just by taking supplements.

But I can’t stop thinking that it probably helped – just like so many studies suggest it would.

Therefore and especially since there are no side effects associated to taking this supplement, it’s definitely one of the few things I recommend taking.